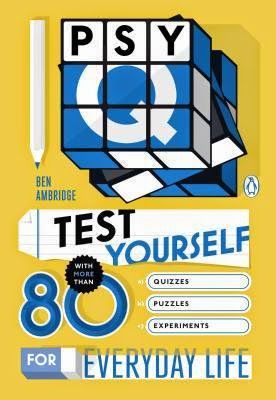 PSY-Q: Test Yourself with More Than 80 Quizzes, Puzzles, and Experiments for Everyday Life

Psychology 101 as you wish it were taught: a collection of entertaining experiments, quizzes, jokes, and interactive exercisesPsychology is the study of mind and behavior: how and why people do absolutely everything that people do, from the most life-changing event such as choosing a partner, to the most humdrum, such as having an extra donut. Ben Ambridge takes these findings and invites the reader to test their knowledge of themselves, their friends, and their families through quizzes, jokes, and games. You’ll measure your personality, intelligence, moral values, skill at drawing, capacity for logical reasoning, and more—all of it adding up to a greater knowledge of yourself, a higher “Psy-Q”.    Lighthearted, fun, and accessible, this is the perfect introduction to psychology that can be fully enjoyed and appreciated by readers of all ages.

A Q&A with author Ben Ambridge
What is psychological intelligence? How is your “PSY-Q” different from your IQ?
Well, the idea of psychological intelligence (or PSY-Q) isn’t meant to be taken too seriously. I’m using the term just as a kind of shorthand for your knowledge of psychology; both your own psychology – your personality, intelligence, thinking style, etc. – and psychology in general – the way we as a species behave, reason, relate to others and so on. IQ tests are a measure of your general intelligence – how smart you are (more on them later).
What’s something people might be surprised to learn from this book?
OK just off the top of my head, here are a few surprising facts: Ambidextrous people are more intelligent than single-handers…Lap dancers’ earnings go up and down throughout the month following their fertility cycle…Librans and Scorpios do better in school than Cancers and Leos and are also more likely to become professional athletes…You can predict how aggressive people are by measuring their hands…But the book’s not just a series of wacky facts – it’s also a collection of real psychology experiments that you can run on yourself and your friends. For example, another surprising fact is that your memory is virtually infinite, as you’ll discover if you take the memory test in the book.
What is new or different about your book than the average introductory Psychology course?
Its interactivity. A psychology course or textbook just tells you stuff. PSY-Q is a set of interactive puzzles, tests, games and quizzes that allow you to discover findings and theories for yourself. It’s also much more light hearted. As well as all the major topics you’d expect to see covered in PSYC101- Freud, Milgram, Zimbardo’s Prison Experiment – there’s some fun stuff too: tests involving food, drink, sex, dating…even the way that you hang your toilet paper.
If you could pick one quiz or exercise in this book to give to everyone you know, what would it be? What could you learn about them from it?
Well I mentioned IQ tests earlier, and the book contains a pretty good one. Most people think IQ tests have been discredited, but actually they’re a pretty good predictor of lots of different things about you, including your earnings and likely occupation, your politics, the likelihood that you believe in God, and even your taste in music. So, whatever they’re measuring, it’s clearly something important. Actually can I pick just one more? If I could combine the results of this IQ test with those of the personality test also in the book, I’d have a decent overall picture of who you are.
Some of the studies and quizzes examine the differences between men and women. Do the findings fall in line with traditional cultural understanding of gender?
In a word, “yes”. So the stereotype is that women look for men who are older, ambitious and high-earning, while men look for women who are younger and good looking. Actually, a cross-cultural study (which you can read about on my blog) found that this pattern holds true for pretty much every society ever studied, from Americans to Zulus. That said, another section reveals how the psychological gender differences that are talked up so much in the media (you know, men are better at map reading, women are better with language, and so on) are mostly so tiny as to be completely insignificant.
What are the most commonly held myths about psychology?
Good question! Actually, I recently did a TED-X talk(and an ill-advised stand up comedy routine) on the Top 10 Myths of Psychology. So I won’t tell you them all in case you want to watch it, but a few are that “Men are From Mars, Women are from Venus” (actually, we’re more similar than we are different), that Psychologists use inkblot tests to measure personality (100 years ago, maybe), that you can be “left brained” or “right brained”, that we learn best when information is presented in accordance with our favorite “learning style” – visual, auditory or kinesthetic – and that listening to Mozart makes you smarter. All are complete myths, but as I explain in the book, most are built around just tiniest grain of truth, so you can kind of see how the myth arose.
Does the book have an overall take-home message?
It’s funny – for most of the time I was writing the book, I didn’t think that it had any kind of unifying theme or central argument which, to be honest, kind of worried me. But when I came to write the foreword, I realized that, actually, it did. The take-home message is that, although it’s notoriously difficult to study people, and although some of the topics might seem frivolous, psychology can succeed only if we take it seriously as an empirical science: We need to propose theories, derive predictions from those theories, then test them in the most tightly controlled experiments possible. Unless we do so, it risks becoming just another pseudoscience like palm reading or homeopathy. And in a small way, by learning about and taking part in the experiments that make up PSY-Q, you can become part of this scientific enterprise.

The publisher has kindly offered to send a copy of PSY-Q to one of my readers. (US/Canada only) Please enter below!

7 thoughts on “PSY-Q by Ben Ambridge – An Interview & Giveaway”