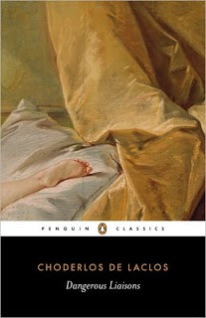 Pierre Choderlos de Laclos produced “Les Liaisons Dangereuses” in an effort to “write a work which departed from the ordinary, which made a noise, and which would remain on this earth after his death.” He did just that. First published in 1782 in four volumes, “Les Liaisons Dangereuses” was an immediate success, and has since inspired a large number of literary commentaries, plays, and films. The novel is an epistolary piece, written as letters between members of the French noble class. An egotistical battle for control ensues between the Marquise de Merteuil and the Vicomte de Valmont, with the promise of sexual gratification to the victor. The primary victims are Cecile, a naive but pretty young girl, her admirer, the Chavelier Danceny, and Madame de Tourvel, a virtuous (and married) young woman. This scandalous web of sexual desire, intrigue, infidelity, the struggle for power, and the corruption of the French upper class is a masterpiece from one of the most subtle and skillful novelists of the 18th Century.

Shocking! Scandalous! An outrage to public decency! This book must have caused quite a stir when it was first printed in the late 1700’s. Sexual innuendo leaps from the pages of this beautifully written epistolary novel. De Laclos certainly accomplished what he set out to do, to create a work that would last long after his death.

The Marquise de Merteuil and the Vicomte de Valmont are two of the most devious minded characters I’ve ever had the pleasure to be disgusted by. Seriously. Still, I had to admire their dedication. They want revenge and will stop at nothing to get it. They know what they are doing and they do it well.

I thoroughly savored every page of Dangerous Liaisons. Thank you to The Classics Club for spinning this book in my direction. The wit and wickedness will be on my mind for a long time to come.