The Good Earth by Pearl S. Buck
Published: 1931
Categories: Classic, China
Source: My own copy
Description:
Wang Lung, rising from humble Chinese farmer to wealthy landowner, gloried in the soil he worked. He held it above his family, even above his gods. But soon, between Wang Lung and the kindly soil that sustained him, came flood and drought, pestilence and revolution….
Through this one Chinese peasant and his children, Nobel Prize-winner Pearl S. Buck traces the whole cycle of life, its terrors, its passion, its persistent ambitions and its rewards. Her brilliant novel beloved by millions of readers throughout the world is a universal tale of the destiny of men.
My Thoughts:
There aren’t enough words to accurately describe my feelings about The Good Earth. Simply put, it is one of the best books ever penned.
The book begins on the morning of his wedding to a slave girl named O-Lan. As he prepares himself we get a sense of the simple, proud, and hardworking man that he is. He is fiercely attached to his land, devoted to his father, and eager to start a family.
As the old saying goes, behind every great man is a great woman. O-Lan is crucial to Wang Lung’s success. Her skills and smarts make all the difference in the fortunes of their family.
Captivating characters and irresistible prose have made The Good Earth one of my favorite books of all time.
“But Wang Lung thought of his land and pondered this way and that, with the sickened heart of deferred hope, how he could get back to it. he belonged, not to this scum which clung to the walls of a rich man’s house; nor did he belong to the rich man’s house. He belonged to the land and he could not live with any fullness until he felt the land under his feet and followed a plow in the springtime and bore a scythe in his hand at harvest.”
“Then Wang Lung, without comprehending it, looked for an instant into the heart of this dull, and faithful creature, who had labored all her life at some task at which she won no reward.”
March 28, 2013 ~ Jennifer @ The Relentless Reader ~ 40 Comments 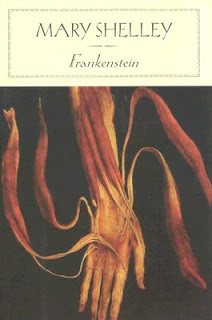 Frankenstein by Mary Shelley
First Published in 1818
Categories: Horror, Classic
Source: My own copy
Description:
Mary Shelley began writing Frankenstein when she was only eighteen. At once a Gothic thriller, a passionate romance, and a cautionary tale about the dangers of science, Frankenstein tells the story of committed science student Victor Frankenstein. Obsessed with discovering “the cause of generation and life” and “bestowing animation upon lifeless matter,” Frankenstein assembles a human being from stolen body parts but; upon bringing it to life, he recoils in horror at the creature’s hideousness. Tormented by isolation and loneliness, the once-innocent creature turns to evil and unleashes a campaign of murderous revenge against his creator, Frankenstein.
Frankenstein, an instant bestseller and an important ancestor of both the horror and science fiction genres, not only tells a terrifying story, but also raises profound disturbing questions about the very nature of life and the place of humankind within the cosmos: What does it mean to be human? What responsibilities do we have to each other? How far can we go in tampering with Nature?
My Thoughts:
I think I like the story of how this book came to be better than I liked the actual book. With that said, I’m glad that I read this classic novel.
Frankenstein must have been extremely chilling when it was first published. I can see why it was so popular. It’s a  creepy tale that brings up all types of moral questions. To my modern mind it wasn’t terrifying. It was more of a “meh” type of scary.
All the monster really wanted was to love and be loved in return. He begged for friendship. He pleaded with Dr. Frankenstein to create a companion for him. When these things weren’t forthcoming he turned to furious revenge.
“Satan has his companions, fellow-devils, to admire and encourage him; but I am solitary and detested.”
“I have love in me the likes of which you can scarcely imagine and rage the likes of which you would not believe. If I cannot satisfy the one, I will indulge the other.”

Frankenstein deserves the classic label for it’s longevity and timelessness. While the tale isn’t as scary as it once was, wonderful writing and fine craftsmanship never go out of style.

🪺🪺🪺 #grandson #eastereggs #easter family #love #spring
He refused to wait until after dinner! 🧁🍫☕️ #ChocolateCake #CoffeeFrosting #Sunday #EmptyNest #Weekend
🧊🧊🧊#wisconsin #wintervibes #ice #snow #winterwonderland #winterwalk #instacold #cold #icy #icestorm
Grandma’s china 🍽💕 #Heirloom #GrandmasChina #1949 #WeddingChina #CrestWoodChina 💕🍽
Adventures in buying an older home! 🏠 #TelephoneBench #RotaryPhone #MedicineCabinet #RazorBladeSlot #MidCentury #MontgomeryWard #Home #House #OldHouse
❤️‍🩹 What a STRESSFUL week this has been. My dad had unexpected triple bypass surgery. He’ll also be having a surgery to deal with an aortic aneurysm in his abdomen. ❤️‍🩹 It was incredible luck that all of this was caught before it was too late. ❤️‍🩹 My dad is my hero, my touchstone, my go-to guy - and I know he means that much to many more people. ❤️‍🩹 Please send him your healing thoughts & energy. He needs all he can get on the long road to recovery. #Dad #TripleBypass #Heart #Healing #Family #HeartSurgery #Recovery #ILoveYouDad ❤️‍🩹
Loading Comments...