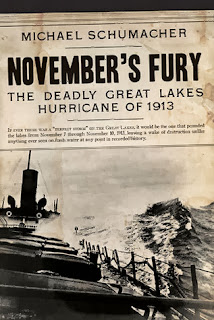 November’s Fury by Michael Schumacher
Publisher: University of Minnesota Press
Publication Date: October 2013
Categories: Nonfiction, Natural Disasters, Midwest
Source: University of Minnesota Press via NetGalley
Description:
On Thursday, November 6, the “Detroit News” forecasted “moderate to brisk” winds for the Great Lakes. On Friday, the “Port Huron Times-Herald” predicted a “moderately severe” storm. Hourly the warnings became more and more dire. Weather forecasting was in its infancy, however, and radio communication was not much better; by the time it became clear that a freshwater hurricane of epic proportions was developing, the storm was well on its way to becoming the deadliest in Great Lakes maritime history.
The ultimate story of man versus nature, “November’s Fury” recounts the dramatic events that unfolded over those four days in 1913, as captains eager–or at times forced–to finish the season tried to outrun the massive storm that sank, stranded, or demolished dozens of boats and claimed the lives of more than 250 sailors. This is an account of incredible seamanship under impossible conditions, of inexplicable blunders, heroic rescue efforts, and the sad aftermath of recovering bodies washed ashore and paying tribute to those lost at sea. It is a tragedy made all the more real by the voices of men–now long deceased–who sailed through and survived the storm, and by a remarkable array of photographs documenting the phenomenal damage this not-so-perfect storm wreaked.
The consummate storyteller of Great Lakes lore, Michael Schumacher at long last brings this violent storm to terrifying life, from its first stirrings through its slow-mounting destructive fury to its profound aftereffects, many still felt to this day.

You might not peg me for the type of reader who enjoys man vs. nature stories. You’d mostly be right. But when the tale takes place practically in my backyard I have to take notice. I’m a Midwesterner. The Great Lakes have been a silent backdrop to much of my life.

Sadly, I didn’t know much about this particular storm. The only Great Lakes sinking I knew of (as many do, thanks to the Gordon Lightfoot song) was the Edmund Fitzgerald on Lake Superior in 1975. I’d briefly read about the terrible storm of 1913, but only as it related to land. I hadn’t given much thought to what happened on the Great Lakes over the course of this “white hurricane”.

The hurricane of 1913 was catastrophic on both land and on the seas of the Great Lakes. Schumacher takes us onto the ships and into the heads of the sailors that battled this amazing storm. The split second choices they made were more important than they realized. Some survived. Many did not.

While I wish there had more personal details about the men on the boats I do recommend this book to aficionados of history, maritime or otherwise. It’s a well written reminder of a different time. The most important reminder is that there were men that never made it home. They shouldn’t be forgotten.