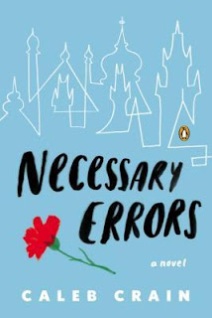 Necessary Errors by Caleb Crain
Publisher: Penguin Books
Publication Date: August 6, 2013
Categories: Coming of Age, Literary, Prague, LGBT
Source: Penguin Books via NetGalley
Description:
An exquisite debut novel that brilliantly captures the lives and romances of young expatriates in newly democratic Prague
It’s October 1990. Jacob Putnam is young and full of ideas. He’s arrived a year too late to witness Czechoslovakia’s revolution, but he still hopes to find its spirit, somehow. He discovers a country at a crossroads between communism and capitalism, and a picturesque city overflowing with a vibrant, searching sense of possibility. As the men and women Jacob meets begin to fall in love with one another, no one turns out to be quite the same as the idea Jacob has of them—including Jacob himself.
Necessary Errors is the long-awaited first novel from literary critic and journalist Caleb Crain. Shimmering and expansive, Crain’s prose richly captures the turbulent feelings and discoveries of youth as it stretches toward adulthood—the chance encounters that grow into lasting, unforgettable experiences and the surprises of our first ventures into a foreign world—and the treasure of living in Prague during an era of historic change.
My Thoughts:

Expansive…that might be the perfect word for this book. The time span that it covers isn’t very long but the depth to which it goes makes Necessary Errors feels like an epic.

The setting of Prague is wonderful. Czechoslovakia is struggling to find it’s way after the Velvet Revolution that took place there in late 1989. Jacob and his band of expat friends are able to view history as it happens, they are able to be part of a city that is coming to grips with a new way of life. It’s quite fascinating.

If I had small issue with this book it was the analytic tone. Jacob seemed to consider and evaluate every gesture and sentence. On the other hand, I remember being that age and doing much the same. Perhaps I have less tolerance for such evaluations now that I’m at a more mature age?

The characters in Necessary Errors are intriguing. They are on the cusp of adult life. They are at the age when being unencumbered is wonderful but mostly taken for granted. Even though these were fictional people I could imagine them looking back at this time of their lives and wishing for the freedom, the adventure.

Necessary Errors is a splendid debut. I look forward to reading whatever Caleb Crain writes next.