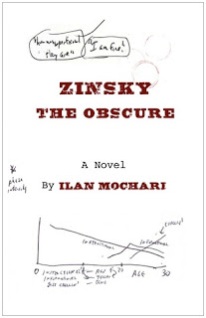 Zinksy the Obscure by Ilan Mochari
Publisher: Fomite Press
Publication Date: April 2013
Categories: Coming of Age, Literary
Source: Fomite Press via TLC Book Tours
Description:
Thirty-year-old Manhattan bachelor Ariel Zinsky is still recovering from his abusive childhood when he realizes no one — including his few living relatives — is truly interested in his narrative. While they numb themselves with the latest celebrity rehab story or the third-world atrocities replayed without ceasing on cable news, he sets out to write his autobiography as an exercise in his own self-medication, recasting himself as the hero in a coming-of-age story.
Fans of A Confederacy of Dunces and The Perks of Being a Wallflower will relate to this tale of overcoming your childhood’s traumas, and the world’s indifference to them.
My Thoughts:
Zinsky the Tall. Zinsky the Bald. Zinsky the Fascinating!

What a character! Ariel Zinsky is flawed and determined. He is smart and single minded. He is funny, sometimes brutal, and almost always awkward.

I had such a wonderful time reading this book. There were some difficult scenes, to be sure, but they were integral to the story. You won’t always like what he does but I can promise that you will be rooting for him.

Football and literature references are sprinkled throughout this book. As a fan of both of those I was thrilled. Most irresistible are the relationships that Zinsky is involved in. His ties to his mother and his bumbling ways with women struck me as natural and true. His relationship with his father is difficult, to say the least.

Mochari has written a compelling tale about one young man’s journey to manhood that reads like a modern classic. I can’t wait to see what he does next.

Ilan Mochari’s novel, Zinsky the Obscure, has earned rave reviews from Publishers Weekly, Kirkus Reviews, and Booklist. Ilan’s short stories have appeared in Keyhole, Stymie and Ruthie’s Club. He is a contributor to Cognoscenti, the online magazine for Boston’s NPR News Station. He has a B.A. in English from Yale University. He used it to wait tables for nine years in the Boston area.

To see the rest of the stops on this tour please visit TLC Book Tours.

32 thoughts on “Zinsky the Obscure by Ilan Mochari”