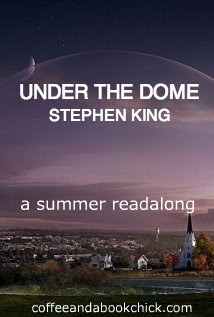 Check out the details here. Thanks to Natalie for hosting!
I’m at the halfway mark in Under the Dome. (55% to be precise) What’s that? You’d like to know what I think of it so far? You’re in luck. I’m going to blab about that right now!
It’s been many moons since I read a big chunky book by King. I’m having a blast sinking back into his style. It feels like coming home. I read a lot of Uncle Stevie in my formative years so reading him again has me feeling nostalgic.

Like many classic King novels this is set in a small town peopled by interesting characters. The Dome goes down and people start showing their true colors. The good guys are awesome, the bad guys are despicable. Just what you’d expect from King.

If I were coming to this as a Stephen King virgin I might not like it very much. The language is simple and the characters aren’t exactly fleshed out. The snob in me says that maybe I should be above this sort of book now. But, I’M NOT! I want to know what’s going to happen next. And that, ladies and gents, says it all.

(There’s a mention of Lord of the Flies. I think that ups the literary cred.)

“…if you were seeing a lot of horseshit, there had to be a pony in the vicinity.”

“Sexy May had met Erudite November, and now they were stuck with each other, refugees in the New England version of No Exit.”

“Give a man or woman back his self-respect, and in most cases-not all, but most- you also give back that person’s ability to think with at least some clarity.”

To sum it up, I’m having a good time with this book and I’m looking forward to the 2nd half.

Are you reading along? What do you think so far?

49 thoughts on “Halfway Under the Dome”

✨ Mark me down as the newest member of the #GreatResignation ✨ Count me among those who refuse to put themselves in danger for low compensation ✨ Note that this is the action of a woman who knows her value & refuses to settle for less ✨ #LaborMovement #QuitYourJob #2021 #ThanksCovid #ProtectYourEnergy
💕 Sunday drive 💕 #Wisconsin #Minong #MinongWi #MinongWisconsin #Sunday #MidwestIsBest
After I finish my bio homework I’m going to reward myself with some old-school Archie comics 💕👩🏼👨🏻‍🦰👩🏻💕 #ArchieComics #ArchieComicsDigest #Comics #BettyAndVeronica #Riverdale
Happy 50th birthday to the hunkiest husband - from the luckiest wife! 🖤🎉🖤 #50 #HappyBirthday #HotHusband #1971 #50thBirthday
“For sale: baby shoes, never worn.” 📚📚📚 #SixWordStory #BabyShoes #Antique #AntiqueEmporiumEauClaire
Taking a break from the routine. ♥️ #OxbowHotel #EauClaireWi #Staycation #RecordPlayer
%d bloggers like this: