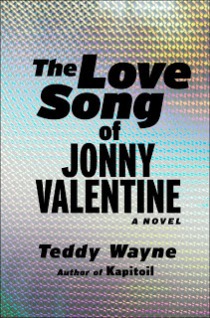 The Love Song of Jonny Valentine by Teddy Wayne
Publisher: Free Press
Publication Date: February 2013
Categories: Coming of Age, Literary
Source: Free Press
Description:
When Whiting Writers’ Award winner Teddy Wayne published his critically acclaimed debut, Kapitoil, it was hailed as “one of the best novels of [this] generation” by the Boston Globe and was shortlisted for a spate of national prizes.
Jonathan Franzen wrote in The Daily Beast that “no other writer, as far as I know, has invented such a funny and compelling voice and story for [this type of character.]” Now, in The Love Song of Jonny Valentine, Wayne turns his sharp wit, flawless narrative ventriloquism, and humane sensibility to our monstrous obsession with fame.
Megastar Jonny Valentine, eleven-year-old icon of bubblegum pop, knows that the fans don’t love him for who he is. The talented singer’s image, voice, and even hairdo have been relentlessly packaged—by his L.A. label and his hard-partying manager-mother, Jane—into bite-size pabulum. But within the marketing machine, somewhere, Jonny is still a vulnerable little boy, perplexed by his budding sexuality and his heartthrob status, dependent on Jane, and endlessly searching for his absent father in Internet fan sites, lonely emails, and the crowds of faceless fans.
Poignant, brilliant, and viciously funny, told through the eyes of one of the most unforgettable child narrators, this literary masterpiece explores with devastating insight and empathy the underbelly of success in 21st-century America. The Love Song of Jonny Valentine is a tour de force by a standout voice of his generation.

We aren’t supposed to judge a book by it’s cover are we? Too bad. Because as soon as I saw this all of my sparkle senses started going off. It’s so shiny and shimmery! The cover was the first thing I loved about this book but it definitely wasn’t the last.

Jonny’s narration is spot-on. His innocence will make you smile and his cynicism will make your heart ache. He is surrounded by people who truly love him but those voices are drowned out by the fans, the marketing, the big machine that keeps him famous.

Every move that Jonny makes is choreographed. Every morsel of food that he eats is mentally cataloged and combated by exercise. Every song that Jonny sings is researched to garner and preserve the most fans. Even though he is fawned over by nearly everyone he meets you sense that he is simply a very lonely little boy.

This book is a scathing commentary on our celebrity worshiping culture that I couldn’t put down.

I do hope you’ll enter the giveaway for this amazing book:

Update: Congrats to Kristin from my little heart melodies! You’re the winner! I’ll be emailing you for your details. I hope you LOVE this book!