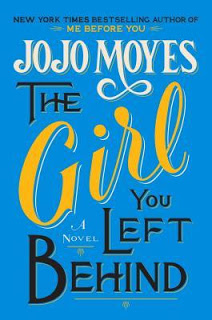 From the New York Times–bestselling author of Me Before You, a spellbinding love story of two women separated by a century but united in their determination to fight for what they love mostJojo Moyes’s bestseller, Me Before You, catapulted her to wide critical acclaim and has struck a chord with readers everywhere. “Hopelessly and hopefully romantic” (Chicago Tribune), Moyes returns with another irresistible heartbreaker that asks, “Whatever happened to the girl you left behind?”France, 1916:  Artist Edouard Lefevre leaves his young wife, Sophie, to fight at the front. When their small town falls to the Germans in the midst of World War I, Edouard’s portrait of Sophie draws the eye of the new Kommandant. As the officer’s dangerous obsession deepens, Sophie will risk everything—her family, her reputation, and her life—to see her husband again.Almost a century later, Sophie’s portrait is given to Liv Halston by her young husband shortly before his sudden death. A chance encounter reveals the painting’s true worth, and a battle begins for who its legitimate owner is—putting Liv’s belief in what is right to the ultimate test.Like Sarah Blake’s The Postmistress and Tatiana de Rosnay’s Sarah’s Key, The Girl You Left Behind is a breathtaking story of love, loss, and sacrifice told with Moyes’s signature ability to capture our hearts with every turn of the page.
My Thoughts:

Jojo Moyes does it again. The Girl You Left Behind is another heartrending tale that moves briskly to a compelling conclusion.

The writing is twisty and vibrant. It’s the kind of story that keeps surprising you. The only thing I didn’t exactly buy into was Liv’s obsession with the painting. There didn’t seen to be a legitimate reason for her to be so gangbusters about it. It was essential to the story that she wanted to keep that piece of art but it kept snagging on my brain as unrealistic.

I found the history in this book to be fantastic. I was even quite a fan of the romantic elements. That’s not something you’ll hear very often from this reader.

Have you read The Girl You Left Behind? I’d love to hear your thoughts in the comments below.

46 thoughts on “The Girl You Left Behind by Jojo Moyes”