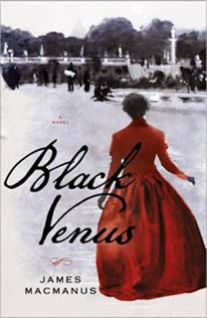 Source: Thank you to Veronica Grossman from Meryl L. Moss Media Relations, Inc.
Description:
For readers who have been drawn to The Paris Wife or Woody Allen’s Midnight in Paris, Black Venus captures the artistic scene in the great French city decades earlier, when the likes of Dumas and Balzac argued literature in the cafes of the Left Bank.
Amongst the bohemians the young Charles Baudelaire stood out—dressed impeccably thanks to an inheritance that was quickly vanishing. Still at work on the poems which he hoped would make his name, he spent his nights enjoying the alcohol, opium, and women who filled the seedy streets of the city.
One woman would catch his eye—a beautiful Haitian cabaret singer named Jeanne Duval. Their lives would remain forever intertwined thereafter, and their romance would inspire his most infamous poems—leading to the banning of his masterwork Les Fleurs du Mal and a scandalous public trial for obscenity.
James MacManus’s Black Venus recreates the classic Parisian literary world in vivid detail, complete with not just an affecting portrait of the famous poet but also his often misunderstood, much-maligned muse.
A vivid novel of Charles Baudelaire and his lover Jeanne Duval, the Haitian cabaret singer who inspired his most famous and controversial poems, set in nineteenth-century Paris.
My Thoughts:

I knew little about Charles Baudelaire and Jeanne Duval. It was a pleasure to get to know them in Black Venus. They were a seductive and intriguing couple that needed one another. Sadly they also annihilated one another. Their tempestuous relationship is at the heart of this novel.

Jeanne Duval was essential to Baudelaire’s poetry. Without her there would have been no Les Fleurs du Mal. The literary significance of that work cannot be understated.

Baudelaire was charged with obscenity after Les Fleurs was published. Reading about the trial in which he was accused of creating an offense against public morals was compelling.

Certain books inspire me to learn more about the people and the settings contained therein. This was one of those books. I found myself looking up the clothes, the people, and the relationships described in Black Venus because I wanted more. That, to me, is a sign of a great book.

Black Venus is a bewitching and illuminating read that I highly recommend.