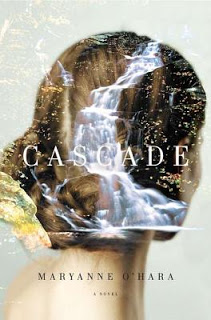 Cascade by Maryanne O’Hara
Publisher: Viking Adult
Publication Date: August 2012 (Paperback: April 2013)
Categories: Historical Fiction
Source: Historical Fiction Virtual Book Tours
Description:
During the 1930s, an artist and reluctant new wife struggles to reconcile her heart’s ambitions with the promises she has made
Cascade, Massachusetts, 1935. Desdemona Hart Spaulding, a promising young artist, abandoned her dreams of working in New York City to rescue her father. Two months later he is dead and Dez is stuck in a marriage to reliable but child-hungry Asa Spaulding. Dez also stands to lose her father’s legacy, the Cascade Shakespeare Theater, as the Massachusetts Water Authority decides whether to flood Cascade to create a reservoir.
Amid this turmoil arrives Jacob Solomon, a fellow artist for whom Dez feels an immediate and strong attraction. As their relationship reaches a pivotal moment, a man is found dead and the town accuses Jacob, a Jewish outsider. But the tide turns when Dez’s idea for a series of painted postcards is picked up by The American Sunday Standard and she abruptly finds herself back on the path to independence. New York City and a life with Jacob both beckon, but what will she have to give up along the way?

This book has a lot going on. There is filial duty, art, marriage, illicit love, bigotry, bankruptcy and the threat of losing a lovely little town due to the thirsty residents of Boston.

Dez puts her artistic career plans on the back-burner to take care of her ailing father. One decision follows another and she finds herself in an unhappy marriage. Asa is solid and he’s a good man. But they want vastly different things. Dez is financially dependent on her husband…and he knows it. (I don’t think I’ve ever read about a more incongruous relationship.)

Her most difficult struggle is that she isn’t able to do what she loves. Dez can’t find a way to be herself. It’s hard to be an individual and an artist in the small town of Cascade. She is expected to have babies, be a good wife, and count her blessings. (This is in 1935, the pressure on women was…well, you know.)

Dez feels an immediate connection with the fellow artist Jacob. Their romance felt a bit forced but it’s understandable why they are attracted to one another and it does add another layer to this tale.

Cascade is about obligations and dreams and one woman’s struggle to balance the two. Even though this story takes place in the 30’s I think it’s message is as timely as ever.

And would you take a look at that cover? Stunning!

Please enter the giveaway below: