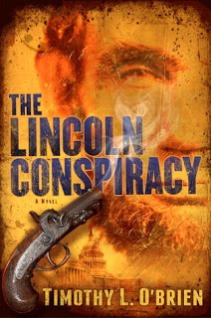 About the Book
Publication Date:  September 18, 2012 | Ballantine Books | 368pDESCRIPTION:  A nation shattered by its president’s murder. Two diaries that reveal the true scope of an American conspiracy. A detective determined to bring the truth to light, no matter what it costs himFrom award-winning journalist Timothy L. O’Brien comes a gripping historical thriller that poses a provocative question: What if the plot to assassinate President Lincoln was wider and more sinister than we ever imagined?In late spring of 1865, as America mourns the death of its leader, Washington, D.C., police detective Temple McFadden makes a startling discovery. Strapped to the body of a dead man at the B&O Railroad station are two diaries, two documents that together reveal the true depth of the Lincoln conspiracy. Securing the diaries will put Temple’s life in jeopardy—and will endanger the fragile peace of a nation still torn by war.Temple’s quest to bring the conspirators to justice takes him on a perilous journey through the gaslit streets of the Civil War–era capital, into bawdy houses and back alleys where ruthless enemies await him in every shadowed corner. Aided by an underground network of friends—and by his wife, Fiona, a nurse who possesses a formidable arsenal of medicinal potions—Temple must stay one step ahead of Lafayette Baker, head of the Union Army’s spy service. Along the way, he’ll run from or rely on Edwin Stanton, Lincoln’s fearsome secretary of war; the legendary Scottish spymaster Allan Pinkerton; abolitionist Sojourner Truth; the photographer Alexander Gardner; and many others.Bristling with twists and building to a climax that will leave readers gasping, The Lincoln Conspiracy offers a riveting new account of what truly motivated the assassination of one of America’s most beloved presidents—and who participated in the plot to derail the train of liberty that Lincoln set in motion.

My Thoughts:
I’m a bit of a history buff. It isn’t that know every date and the details of every era. It’s that I WANT to know all of those things. Maybe buff isn’t the right word…maybe history fan would be better.

Because of my love of all things historical I was skeptical going into this book. A retelling of the murder of  President Lincoln? Hmm, I don’t know about that.

Color me surprised! This was a great book. The characters were believable, the plot twists kept me guessing and there was plenty of suspense. I enjoyed the historical characters that pepper the story. They were inserted into the tale in an authentic way.

The protagonist, Temple McFadden, was flawed and I liked him all the more for it. I enjoyed reading about his wife Fiona as well. She’s a strong woman who doesn’t need a man to rescue her every five minutes.

If you like history, action, suspense and fine story telling you really ought to read this book.

Tomorrow I’ll be posting a short interview with the author Timothy L. O’Brien, look forward to that!

8 thoughts on “The Lincoln Conspiracy by Timothy L. O’Brien”