A powerful new novel about an ordinary family facing extraordinary times at the start of the Chinese Cultural Revolution  China, 1957. Chairman Mao has declared a new openness in society: “Let a hundred flowers bloom; let a hundred schools of thought contend.” Many intellectuals fear it is only a trick, and Kai Ying’s husband, Sheng, a teacher, has promised not to jeopardize their safety or that of their young son, Tao. But one July morning, just before his sixth birthday, Tao watches helplessly as Sheng is dragged away for writing a letter criticizing the Communist Party and sent to a labor camp for “reeducation.”
A year later, still missing his father desperately, Tao climbs to the top of the hundred-year-old kapok tree in front of their home, wanting to see the mountain peaks in the distance. But Tao slips and tumbles thirty feet to the courtyard below, badly breaking his leg.  As Kai Ying struggles to hold her small family together in the face of this shattering reminder of her husband’s absence, other members of the household must face their own guilty secrets and strive to find peace in a world where the old sense of order is falling. Once again, Tsukiyama brings us a powerfully moving story of ordinary people facing extraordinary circumstances with grace and courage.

My Thoughts:
I’ve read quite a few books about this period in Chinese history. I found some of the historical details a bit off, but the story of the family itself was very lovely. I liked that the book was told from the point of view of different characters. Tao’s grandfather’s sections were especially poignant. 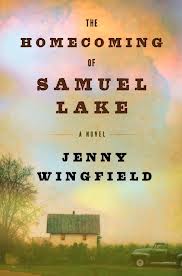 Description:
Every first Sunday in June, members of the Moses clan gather for an annual reunion at “the old home place,” a sprawling hundred-acre farm in Arkansas. And every year, Samuel Lake, a vibrant and committed young preacher, brings his beloved wife, Willadee Moses, and their three children back for the festivities. The children embrace the reunion as a welcome escape from the prying eyes of their father’s congregation; for Willadee it’s a precious opportunity to spend time with her mother and father, Calla and John. But just as the reunion is getting under way, tragedy strikes, jolting the family to their core: John’s untimely death and, soon after, the loss of Samuel’s parish, which set the stage for a summer of crisis and profound change.In the midst of it all, Samuel and Willadee’s outspoken eleven-year-old daughter, Swan, is a bright light. Her high spirits and fearlessness have alternately seduced and bedeviled three generations of the family. But it is Blade Ballenger, a traumatized eight-year-old neighbor, who soon captures Swan’s undivided attention. Full of righteous anger, and innocent of the peril facing her and those she loves, Swan makes it her mission to keep the boy safe from his terrifying father.With characters who spring to life as vividly as if they were members of one’s own family, and with the clear-eyed wisdom that illuminates the most tragic—and triumphant—aspects of human nature, Jenny Wingfield emerges as one of the most vital, engaging storytellers writing today. In The Homecoming of Samuel Lake she has created a memorable and lasting work of fiction.

My Thoughts:
Spectacular! I honestly laughed out loud and wept and held my breath at different points as I read this novel. Swan is a fantastic character who reminded me not a little of Scout Finch from To Kill A Mockingbird. (Warning: There are some scenes that will make your stomach turn)

The Second Empress by Michelle Moran
Publisher: Crown
Publication Date: August 2012
Category: Biographical, Historical
Description:
After the bloody French Revolution, Emperor Napoleon’s power is absolute. When Marie-Louise, the eighteen year old daughter of the King of Austria, is told that the Emperor has demanded her hand in marriage, her father presents her with a terrible choice: marry the cruel, capricious Napoleon, leaving the man she loves and her home forever, or say no, and plunge her country into war.
Marie-Louise knows what she must do, and she travels to France, determined to be a good wife despite Napoleon’s reputation. But lavish parties greet her in Paris, and at the extravagant French court, she finds many rivals for her husband’s affection, including Napoleon’s first wife, Joséphine, and his sister Pauline, the only woman as ambitious as the emperor himself. Beloved by some and infamous to many, Pauline is fiercely loyal to her brother. She is also convinced that Napoleon is destined to become the modern Pharaoh of Egypt. Indeed, her greatest hope is to rule alongside him as his queen—a brother-sister marriage just as the ancient Egyptian royals practiced. Determined to see this dream come to pass, Pauline embarks on a campaign to undermine the new empress and convince Napoleon to divorce Marie-Louise.
As Pauline’s insightful Haitian servant, Paul, watches these two women clash, he is torn between his love for Pauline and his sympathy for Marie-Louise. But there are greater concerns than Pauline’s jealousy plaguing the court of France. While Napoleon becomes increasingly desperate for an heir, the empire’s peace looks increasingly unstable. When war once again sweeps the continent and bloodshed threatens Marie-Louise’s family in Austria, the second Empress is forced to make choices that will determine her place in history—and change the course of her life.
Based on primary resources from the time, The Second Empress takes readers back to Napoleon’s empire, where royals and servants alike live at the whim of one man, and two women vie to change their destinies.
My Thoughts:
I’ve been a fan of Michelle Moran for quite a while. I especially enjoyed Madame Tussaud and Cleopatra’s Daughter. The Second Empress was another good one. Napoleon’s sister Pauline was my favorite character in this book ~ What a piece of work that woman was!
Yet again I wanted more information.(I often want to know every damn thing I can about a subject) I wish I knew more about this period and about Napoleon. That means that I’ll need to hunt down a good nonfiction book about his life and times.
Worth reading? Definitely.

10 thoughts on “My thoughts on: A Hundred Flowers, The Homecoming of Samuel Lake & The Second Empress”